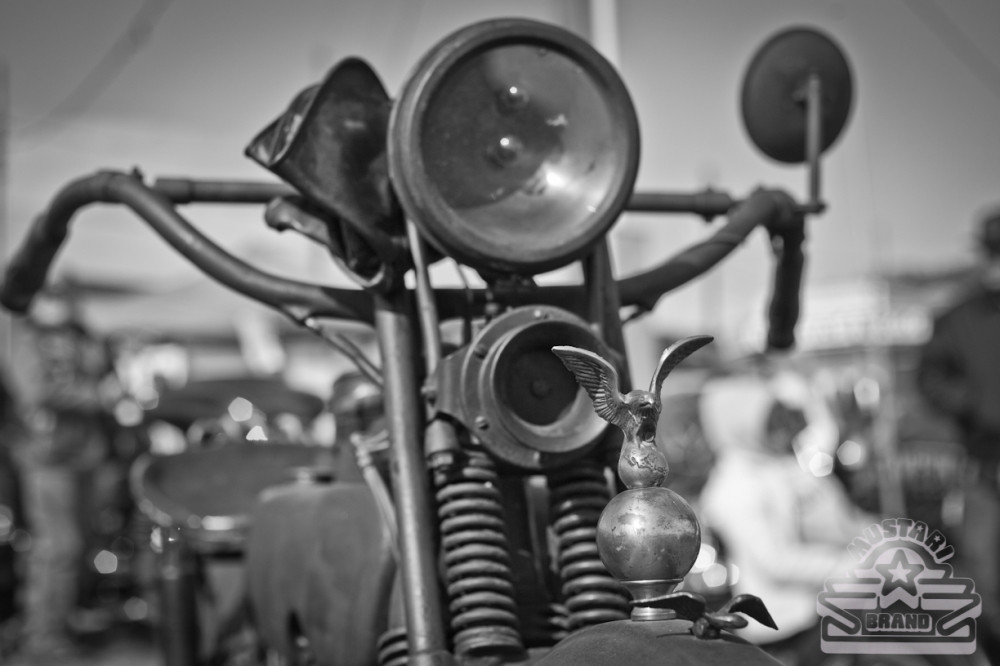 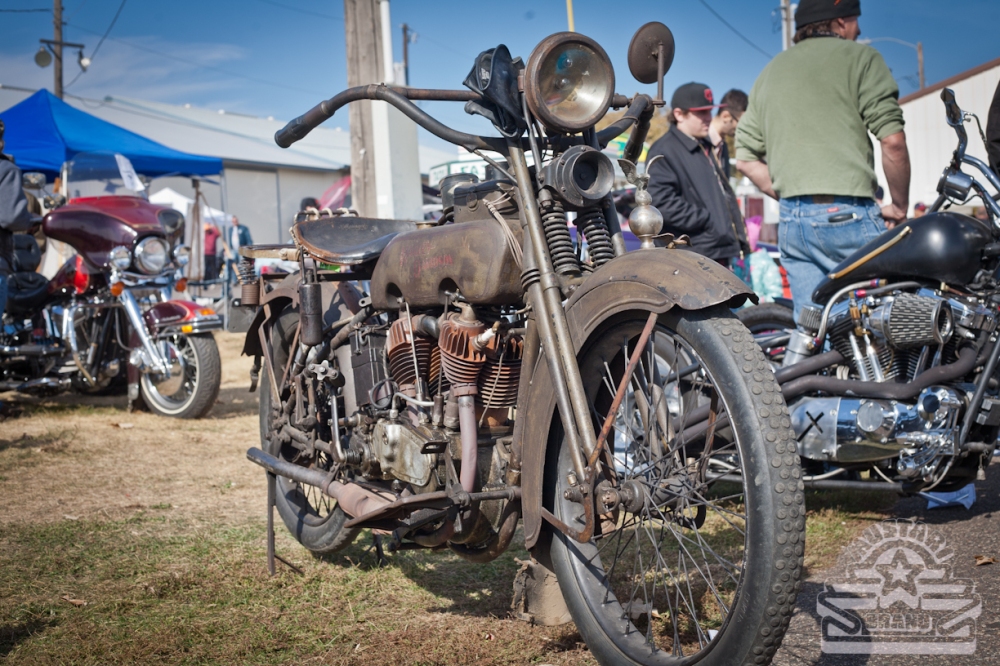 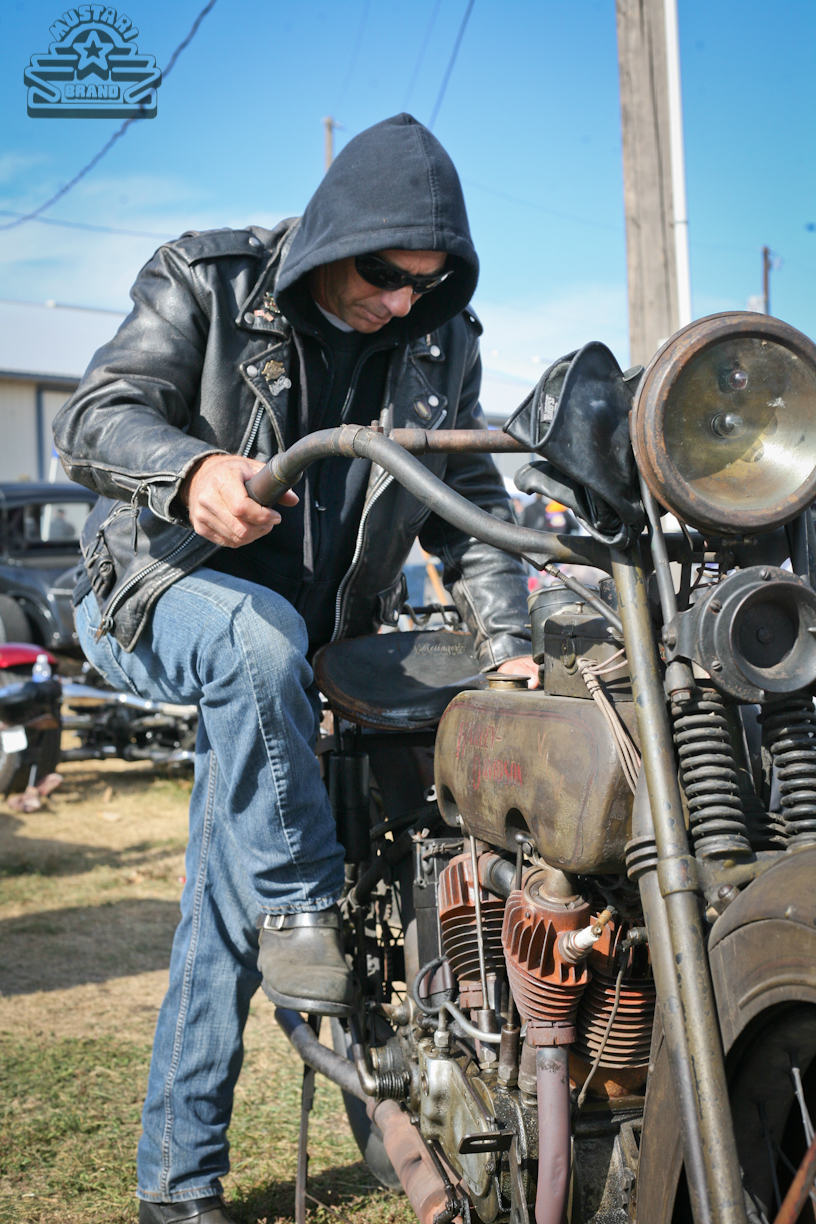 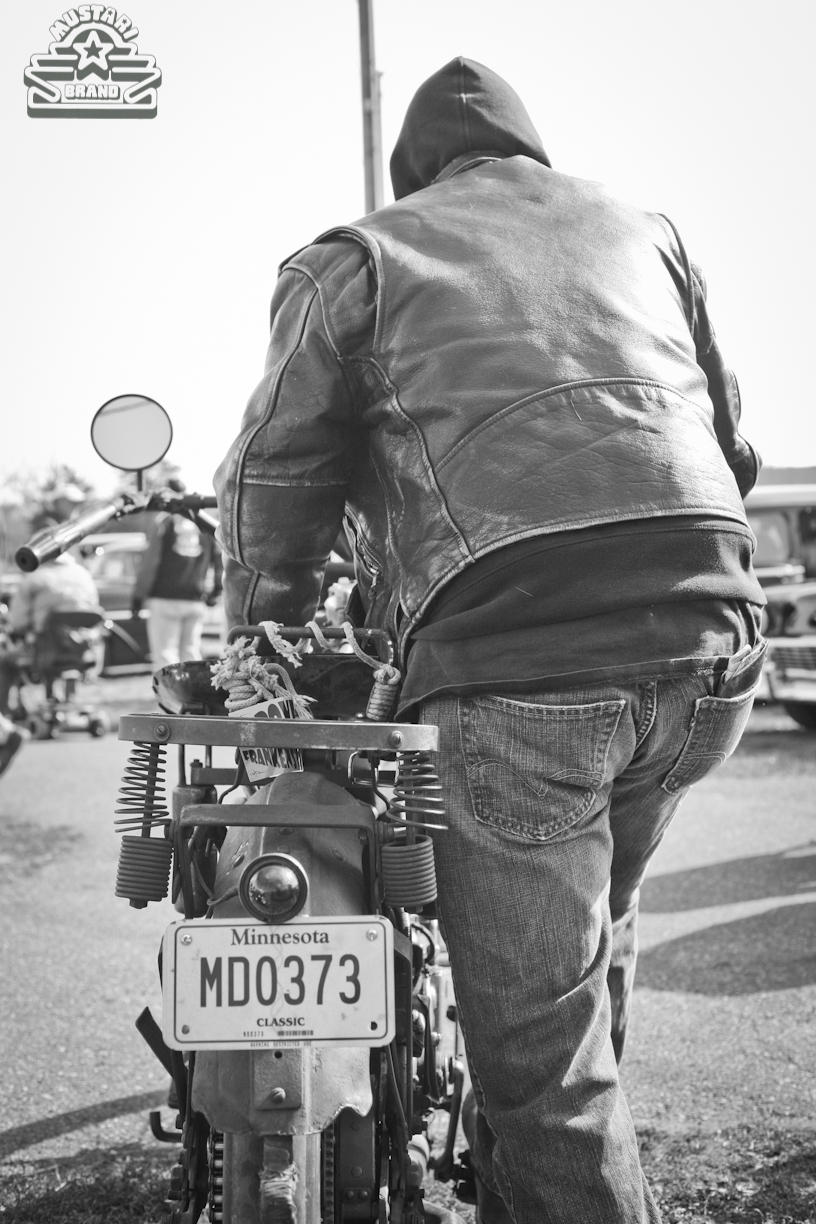 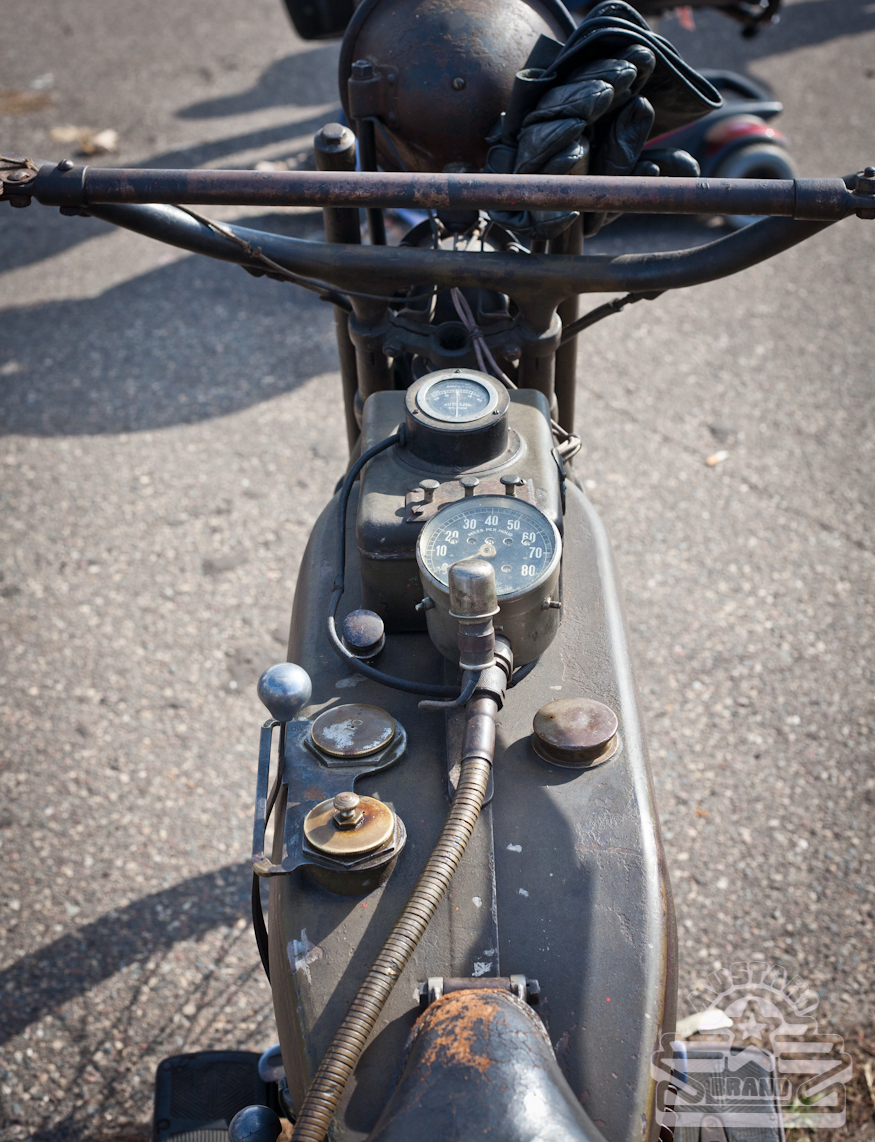 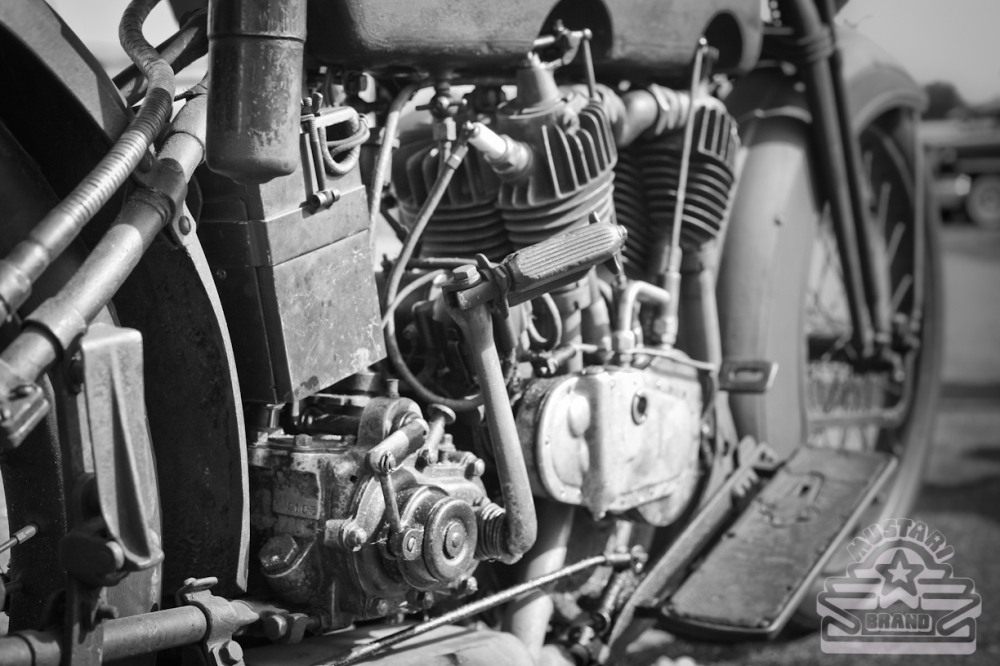 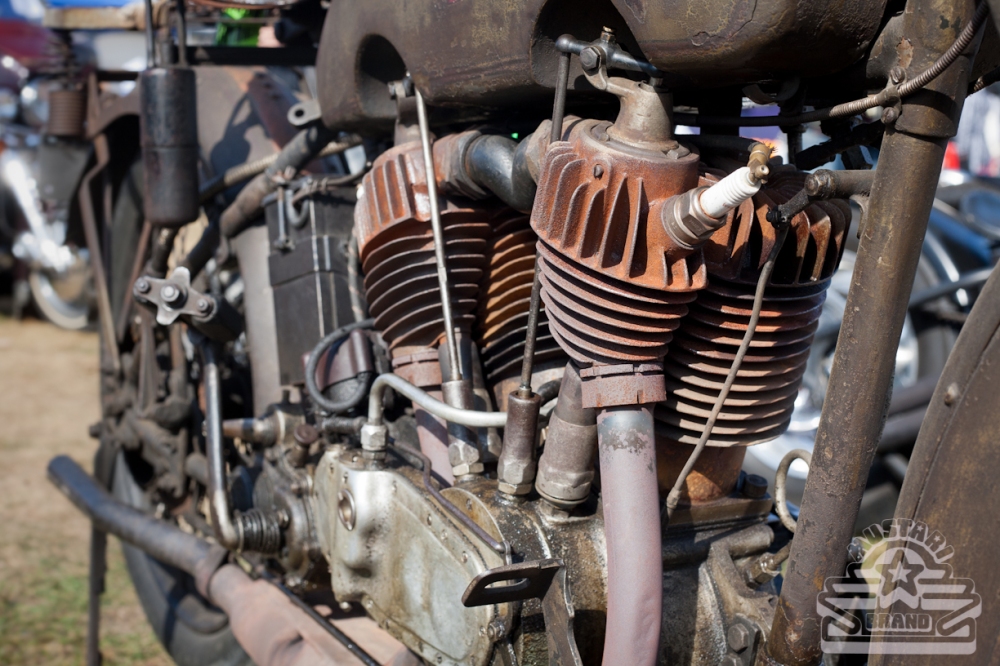 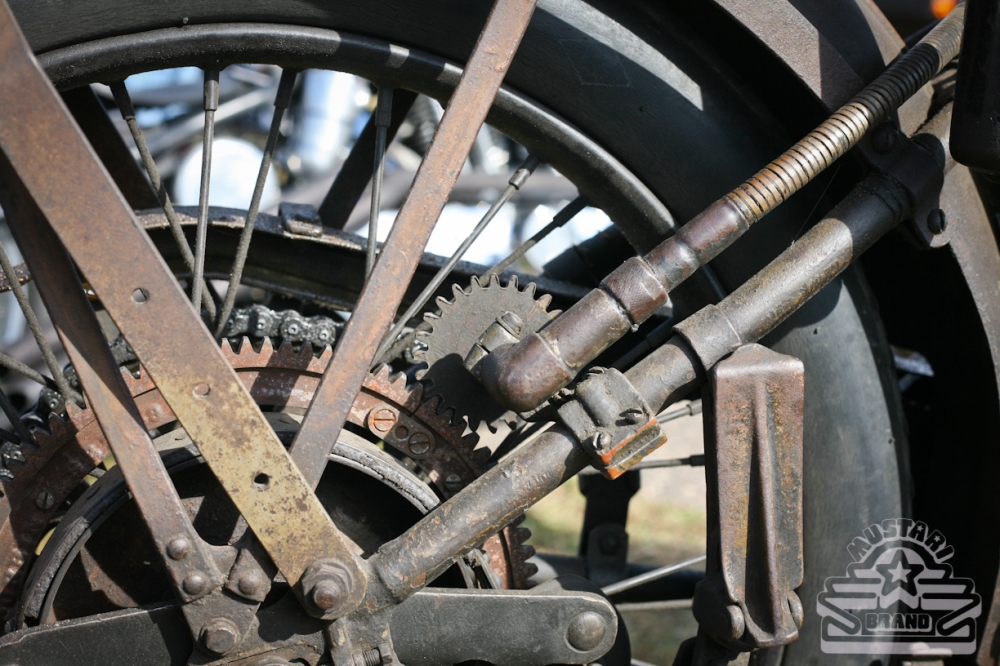 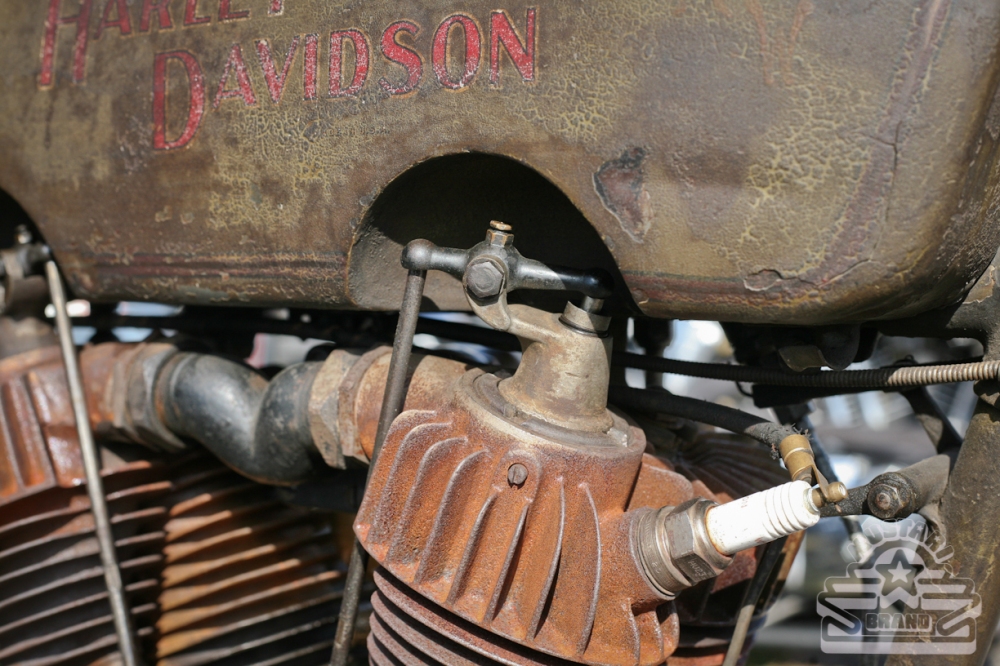 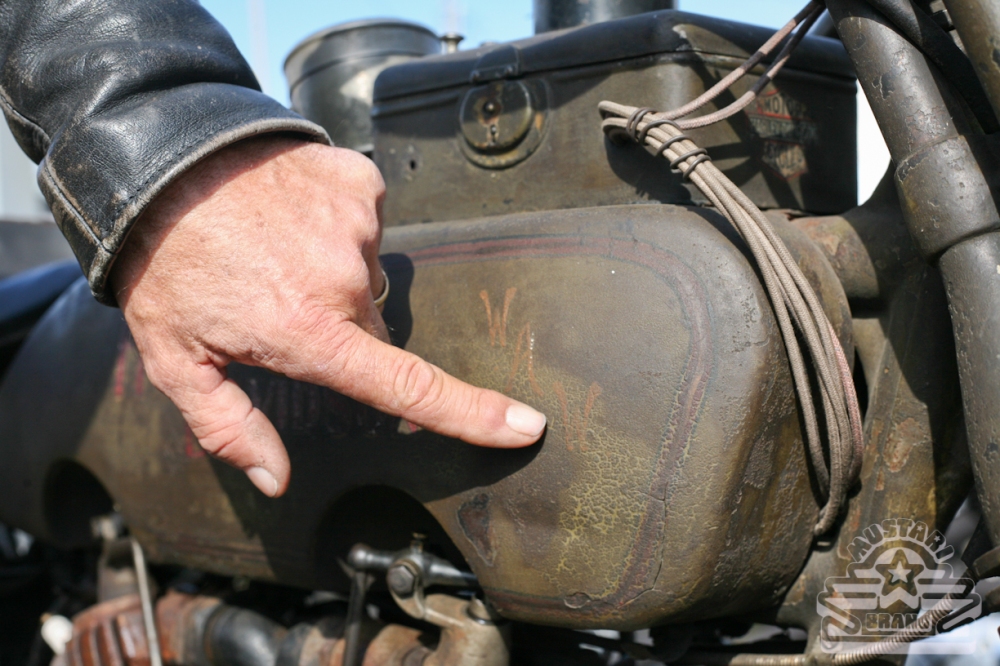 This 1922 Harley Davidson JD stole the show for me at the Frankensteiners’ Ball last Sunday. There weren’t many bikes there, but the ones that showed face were all unique with this being the icing. I had the opportunity to meet John, the owner, and get some stories on its life.

John bought it completely disassembled in boxes some years back and underwent a four year restoration using all original parts, aside from some engine components whose life expectancies demand replacement. As far as he knows it is the original paint, which is displaying 90 years of wear, distress and fading. It also sports original upgraded options like a speedometer and volt meter. The speedometer on these is a marvel to look at mechanically with two gears meshed on the rear wheel (photo above) and a large cable drive going to the speedometer itself on the tank. Gauges weren’t backlit at that point so there is a light bulb in a housing above it to illuminate the face.

The JD was the larger, beefed up model and it housed a 74 cubic inch power plant which can be differentiated from the smaller J model’s 60.34″ by the number of fins on the exhaust spigot… 6 corresponding to the larger model and 5 to the smaller.

Motorcycling was a real activity back in the first half of the century and even more so in the first quarter of it. The clutch was engaged with by the left foot via a rocker pedal (not to be confused with suicide, which will release when pressure is taken off instantly), the left hand operated the timing advance on the grip along with shifting through the gears on the tank, the right hand operated throttle and the right foot would engage the brake. All your appendages were required to travel properly and be a man, but some women did it successfully with one less.

John is great enough to have this thing on the road religiously and has it tuned to fire on the first kick after a couple of primes, which is more than most can say about their FLs. He knows how cool it is and believes that it belongs on the road for his enjoyment and that of other appreciators. In terms of its personal history, someone lettered “WAW” on the tank and John’s not too sure of the story behind it. I searched around and came up with “World at War” MC, but it was vague with no history or date and a few references to “Wild About Wheels” which doesn’t mean anything to me. So, if you have any info on it please fill us in.

Thanks to John for the time and info, I hope I was accurate and I look forward to seeing you on the road.